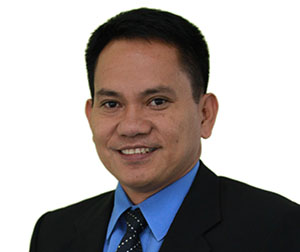 Jaime Bacud (‘’Jimmy’’) has recently assumed the position of Vice President for Upstream Operations in PNOC Exploration Corporation (PNOC EC), the oil, gas and coal subsidiary of the state-owned Philippine National Oil Company. PNOC EC is mandated by the Philippine government to take the lead in the exploration, development and production of the country’s oil, gas and coal resources.

Jimmy previously worked at the Oil and Gas Division of the Philippine Department of Energy where he acquired his initial exposure in the petroleum sector more than 25 years ago. Prior to that, he was doing mineral exploration work, particularly gold, in the southern Philippines.

Jimmy is a member of the AIPN, Southeast Asia Petroleum Exploration Society (SEAPEX) and the European Association of Geoscientists and Engineers (EAGE). He is currently a member of the Philippines Steering Committee of the AIPN Asia Regional Chapter. He has been assisting in the organization of Asia Chapter Events in Manila since its inaugural talk back in December 2011.